On 2/23, the Law and Finance Committee (composed of two council members) came to the work session split on whether or not to recommend a change to the current ordinance which allows for 4 hens on 1 acre lots or larger. Gra Singleton pointed out that Raleigh has no restrictions and no issues. Ken Marshburn said he wouldn't support it because of HOAs [but that is really a separate issue and disregards all the people in Garner not under an HOA]. Buck Kennedy said that he received more letters about this issue than any other and they were 5 to 1 in favor of chickens, but... he could not support it because there would be pandemonium in Garner if it were to change [I haven't noticed pandemonium in Raleigh, Apex, Wake Forest...]. Kathy Behringer, who told me before the election at the grand opening of White Deer Park that she was in favor of this and her husband wanted to get some hens, now said she didn't support it. She said that although some people [me] are responsible, she didn't think the people in Garner would be. [What does that say about what she thinks of her constituents?] She also said if you were interested in chickens, get a variance from your HOA. [What? They are unlawful but go ahead and get permission from your HOA? That makes no sense]. Jackie Johns didn't seem to have a strong opinion either way, but sided with the majority.

Since there was not enough support for a vote, it died in committee.

I came away from the meeting disappointed at the reasons the council members gave for not supporting it. It was more prejudice and hear-say than anything else. People who don't like hens can't point to a small backyard flock of hens that bother them - they just don't like the "idea" of hens. The fact is there are hens in Garner and no one knows it because they are so insignificant. There is no pandemonium.

We are not giving up. We will keep this campaign going. Unfortunately, no one is up for reelection until 11/2011, not that campaign promises mean anything as I experienced firsthand. We will have to change the minds of the current council, and make them earn our vote next time.
Posted by Friends of Hens at 1:14 PM 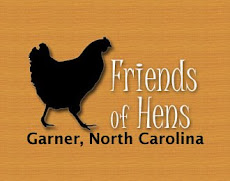